Let there be Light

Next was time to shed a little more light on the road in front of me. If any of you have had a chance to ride a GS you'll probably agree with me that the 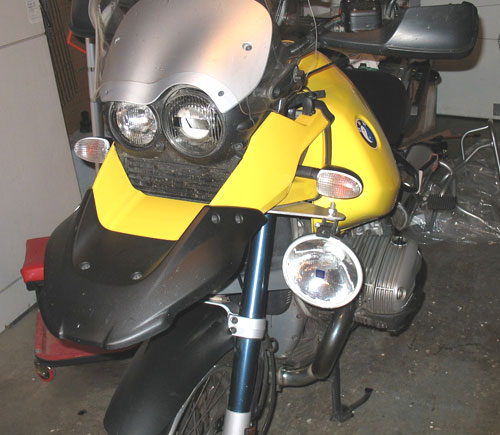 stock light SUCK! I'm actually surprised they even went past the fender extension I put on the bike.

My first set of lights were the Hella 500 fog lights. When they went on there were three factors that made me decide on them.

First was that they threw off a lot of light. All of the other riders I'd talked to that had these mounted were very happy with the amount of light they threw off. Anything is going to be better than stock and

Second was the price. Yea people like PIAA's better but I was able to get these lights for around $30 new on E-bay and that was more in my budget.

Thirdly they just flat out look cool. There's nothin like hanging a light that's over six inches in size and has a cool rock cover for when you aren't using them.

This was going to be a really simple project sine I planned on replacing the 500's with a set of Hella FF50's . I planned on simply cutting the positive and ground off of the old ones, remove the light bar and lights, put the new light bar and FF50's on, and connect the new lights to the wires for the old lights since the relay and everything else already existed.

I went with the FF50's because they use a Free Form ( FF ) reflectors which take better advantage of the bulb by utilizing the whole reflector which has over 50,000 precisely calculated surface points to aim the beam exactly where it is needed.

The 500 series used a simple parabolic reflector technology which has been around almost as long as cars have had lights on them.

I also wanted something a little bit smaller than the 500's . I plan on adding another set of lights similar in size to the FF50's so that I can leave one on during the daytime for visibility and one set for adding more light to the road and ditch at night.

Maybe I'll even check my gas mileage to see if it improves at all after taking those huge lights off. Adding that much surface area to the front of the bike can't be good can it?

Well the project went without a hitch and you can see by the picture above that the new lights are on. I couldn't believe how much light they threw off the first time I used them. The beam from these lights was definately brighter and went farther down the road than my old ones did.

Oh, and did I mention that I got these lights new for only around $30 off of Ebay?