$12.50
Home > Electrical
Time to start the clean up
Let there be Light

Anyone that's owned a bike and added a few Farkles (gadgets) to their bike knows that sometimes the hardest thing to do is find a good power and ground source. This task becomes more and more daunting as bikes are designed with more and more plastic and body panels that hug the frame in an effort to streamline the bikes.

Luckily the BMW GS doesn't have much for bodywork to work around but that doesn't mean it's not hard to find spots to run power and ground for accessories and since I was going to be mounting a few ( radar detector, XM radio, additional driving lights ) I figured it was time to start with a good solid foundation for my gear. For me a good foundation is basically two things.

1) Only one or two spots where all of my power and grounds will originate from. Electrical problems are hard enough to troubleshoot without worring about where something originates or is grounded. I've already been pulled over at 3am with failed driving lights trying to figure out the problem with a flashlight in my mouth and it's not fun.

2) Keep the install clean and protect them from metal objects as much as possible. This helps ensure that 3 months down the road you haven't worn through your power cable and are now shorting things out on the frame or some other metal object.

The way I choose to get power and ground to my accessories is the Blue Sea 5025 fuse block with a negative bus. This little wonder lets me run both power and ground back to one location and uses car type fuses that can easily be found at most gas stations or automotive supply stores. A long time ago I removed my standard GS toolkit and replaced it with a tool roll since I added more tools than they give you with the standard took kit. This left my toolkit tray wide open to use and it just happens to be the perfect size to put the 5025 inside.

My goal was to run my Radar Detector, XM Radio power converter, existing driving lights, one spare feed in the headlight area, and one spare feed that will stay under the seat. The reason for running the two spare feeds was simple, I don't like taking things apart if I want to add a gadget. By running one to the fairing and one to mid-body I would be set for almost anything else I can imagine. One of my other reasons was that I was going to put everything in a loom when running it. trying to put more wires into the loom later down the road would be a nightmare so in my eyes it was better to do it now.

The Roady2 radio would be mounted on a HoonHardware XM mount to again keep things clean. By doing it this way the radio and antenna can be cleanly mounted and easily accessed. The dash area was too far away for my reach and I wanted to be able to move the roady between bike and truck.

I had to do a little grinding of the raised areas with my dremel tool to ensure a flat surface. For added support I also used a small block of scrap wood in one area of the tool tray that was recessed below the mounting surface I was going to use. This probably wasn't necessary but I wanted to make sure that all four bolt holes of the 5025 base were used.

Once I found the location that the mounting bolts would be penetrating the tool tray I made sure they wouldn't interfere with the body work by drilling 5 small holes in the tailpiece under the tool tray. 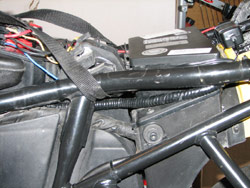 For the feeds on my distribution block I chose to go right to the battery for the positive and to the bolt that holds the took kit tray to the frame for my ground. I wasn't sure if that would be sufficient grounding for what I needed but after doing some tests with my multimeter and some other gadget I haven't got a clue what it's called it looking like this was going to be the way to go.

I started from the front of the bike with the necessary wires and pulled them back towards the bike. When I got mid-frame I added the wires for the main feed, the spare, and the driving light power supply. All of these were then wrapped with plastic, flame resistant, wire loom that I got from my local auto supply store. The loom was then wrapped in electrical tape because the route I chose took a little tugging and the electrical tape helped it slide thru the area easier. 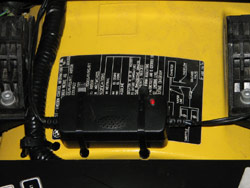 My XM radio hardwire power converter was the exception to my rule of running isolated power and ground. This unit takes the 12v from the bike and steps it down to the 6v that the radio needs to run.

I still ran it to the distribution block but kept the wires stock and ran them along the same path as the wire loom.

To secure this to the bike I drilled 4 holes large enough to allow my zip ties to pass through and just zip tied it to the body work. I went back after about 2,000 miles and checked to see how secure it was and I couldn't budge it so I'm going to leave the zip ties there permanantly. 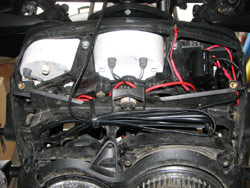 Now that I had everything routed roughly it was time to start hooking things up and securing the spare feeds so they were out of the way. Up in the nose piece I simply zip tied the spare wire to a support bracket and wired the V1's direct wire adapter ( Part No. 20305 ) to the feed and ground wire that I ran from the distribution block.

To secure the wire adapter to the bike I just cleaned off a surface with an alcohol pad and used the velcro that was supplied.

I had notched out the instrument cluster just enough to run the power cord to the V1 from the supply and left enough coiled up behind the instruments in case I want to move the radar detecter to another location. 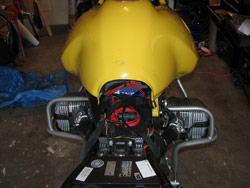 The second spare feed was going to be coiled up just above the airbox where I have my existing driving light relay located. I've actually got enough wire to run this to the front of the bike if I need to add another device or outlet to the front of it.

Currently the bike already has one Powerlet GS adapter located on the left side of the beak which is where I run the GPS off of for now.

With all the wires run it was time to make the final connection and cross my fingers that I had hooked everything up correctly. Positive to red, negative to black, put in a fuse, turn the key and hit the switch for the driving lights and cringe while I waited to hear some kind of pop.

Lucky for me everything worked fine and there were no problems with the wiring. I decided not to test the XM or the radar detector because I didn't have a properly sized fuse for them. My plan was to run a 1amp fuse just like the V1 came with and finding one was more of a chore than I thought it would be. I think I went to two gas stations and three auto supply stores before I finally went to a NAPA in my neighborhood and bought the last five 1amp fuses they had. I'll definately be carrying these on the bike since they are so hard to find.

Once I got the new fuses I hooked up the rest of the gear and tested it and to my amazement everything worked out as planned. In the past electrical parts and I just haven't got along so I was really thinking I was going to screw something up here. I think what saved me with this project is setting aside two days to do it. It was a beautiful weekend when I did this and I might have been able to cram it into a one day project but for once in my life I decided to take it very slow.

Here you can see all the gear, including my XM, GPS, and the Valentine 1 in the Moto Locker Box .